From schools, gyms, and healthcare facilities to corporate offices, industrial units, and government organisations, storage lockers contribute to making daily operations more efficient. Lockers have become an essential part of our daily lives. Today, the global locker industry is worth more over trillions of dollars and growing significantly.

The roots of modern locker rooms can be traced back to ancient Greek, around 2500 BC. Since then, lockers have evolved to provide us with the most convenient storage solution with the best safety. Let’s get a better understanding of the history of lockers. 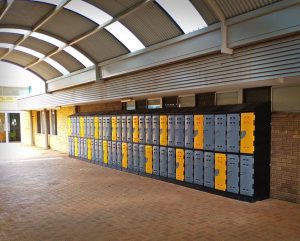 Archaeologists in Nineveh, Egypt, found the oldest locker, dated approximately 4000 years old. The traces of lockers can also be found in the Greek civilisation between 500 BC and 300 AD.

If we consider the modern history of the lockers, the first one is known to be used at the Harleton Green Gold Club in South Carolina in 1786. The identified locker was only a stack of cupboards with padlocks.

In 1848, Victorian-era British Warship HMS Terror’s wreckage also contained traces of storage lockers. The first padlock was introduced in 1857 by the Yale Lock Company, and their cylinder lock was brought forward in 1865.

The Evolution of Locker Rooms

As lockers came to be used in more industries, so their design evolved to meet a wide range of diverse needs. The small and narrow compartment units that used to be placed in changing rooms or dressing rooms have expanded, providing more than simple utility and now a source of comfort and even luxury. From merely a place for changing clothes and preparing for the next task, locker rooms too have evolved to become a space where people gather and take time to socialise. Lockers still provide the basic function of keeping items safe, but they can also charge phones, hygienically store food and keep dangerous chemicals in specific required conditions. From schools and colleges to offices and other workplaces, lockers have become an integral part of our daily lives.

The most popular materials for manufacturing lockers are wood, fabricated wood, metal, steel, plastic, stainless steel, solid phenolic and plastic. The lockers are manufactured in different sizes and colours and shipped to the final destination for installation. Locker manufacturers also provide customised solutions to meet specific storage needs. Lockers have become more convenient to use and offer better safety with advanced locking systems.

The history of lockers goes way back, and so do the moments related to it. Let’s take a look:

A Bunch of Newspapers:

In 2010, a storage unit was discovered that was filled with old newspapers from August 16th 1977, the day Elvis Presley died. Surprisingly, the 33 year old newspapers were in excellent condition and presented nostalgic moments for many fans. The stack of newspapers ended up being valued at ninety thousand dollars.

A Locker that Offered the Lost Art:

Darrell, “The Gambler” of the “Storage Wars” reality TV series, took a huge risk of paying three thousand six hundred dollars for a locker in the 3rd season. And it turned out to be a winning bid as the locker revealed a chamber filled with original art by Frank Gutierez. The drawing, paintings, and other objects were estimated to have a value of around three hundred thousand dollars.

Dan and Laura from “Storage Wars” auctioned off a locker for around one thousand US dollars in 2011, proving to be one of the most remarkable sales of their career. The locker contained a real life pirate’s treasure, valued around half a million US dollars (USD$500,000). It contained eight precious pieces of Spanish Gold, some as old as the 16th century. The box was so heavy that it took three strong men to move it out of the storage. Until this date, the buyer has preferred to remain anonymous.

In 2011, a worn copy of Action Comics # 1 was found by the winner of a California storage auction, which was put on ComicConnect.com to sell for over two million dollars. The comic’s former owner turned out to be Hollywood legend Nicholas Cage, and he had purchased the copy in 1997 for fifty thousand dollars.

Sometimes, the stuff stored in these lockers turns out to be valuable and makes history. If you have forgotten where you have put the jewellery received from your parents or grandparents, you might want to check your storage lockers. Or you could leave them there to be found by some lucky person many years from now… and make your own contribution to history!

Personalise and customise your locker with a variety of accessories: *Feature limited to the F SERIES lockers